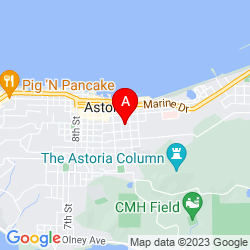 Grace Episcopal Church is the oldest church in continual use in Astoria, and in the Episcopal Diocese of Oregon, as well as the second oldest in all of the northwest.  The Parish was incorporated in 1864; the first Grace Church building was near the Post Office on Eighth and Commercial.

The first service at our current location was on Easter Sunday, April 25, 1886. Four items from the original church are incorporated in the sanctuary here:
• the Sacraments Window behind the Altar;
• the Robert Trenchard window dedicated to a young man;
• the Baptismal font made from Bellingham Bay stone;
• and the larger bell , the first church bell in Astoria.

The history of Grace Episcopal Church in Astoria, Oregan began in 1838 with the visit of the first Anglican missionaries to the area. Twenty four years later, on September 4, 1864, The Reverend Thomas A. Hyland  took up the considerable challenge of being the first Episcopal rector on the north coast of Oregon, serving from 1864 to 1878.

The first two years of Episcopal services were held in the courthouse. A few years later in 1866 the original Grace Church was erected where the Spexarth Building now stands at Eighth and Commercial streets. The name ‘Grace’ was chosen by Father Hyland’s wife, Martha.

Within a couple of decades the congregation had outgrown the original building. The Rev. Marden Wilson, Rector from 1882 to 1886 led parishioners in a drive to build a new church on Franklin Avenue on land that was a legacy from Mrs. Susan Shively. This is the beautiful Gothic structure in which we worship today.

Father Wilson and his congregation celebrated the first service of Holy Communion on Easter Sunday 1886. The building was consecrated on June 6th, 1886 by the Rt. Rev. Benjamin W. Morris, the second Bishop of Oregon. A beautiful old wood-framed brass plaque of dedication is located in the Narthex, at the top of the stairway leading into the worship space.

Several  treasures were brought from the old church to the new.  Among them are the Baptismal Font, the Sacraments Window above the altar, the Trenchard Memorial Window in the nave and the deeper voiced of the two bells in the tower.

In 1891, roadwork was done to create what is now Franklin Avenue, in front of the church. The new road was significantly above the original street level, and the church building was lifted more than ten feet to elevate the front entry of the church above what was then a muddy and unpaved Franklin Avenue.  Other structural changes include a new wing which enlarged the Vestry Room and added a large meeting room above. The Rectory was built next door to the church in 1916.  The Parish Hall and several classrooms in the undercroft were added in 1954.

The Grace Parish Family celebrated 100 years at the present location in 1986 with Pastor Sallie Shippen, the first female to serve as a Rector in the Diocese of Oregon.

Following a successful “Handicapped Access” fund raising effort, an elevator was installed to provide handicapped access to the Nave.  It was dedicated June 15, 2003, and “Handicapped Parking” — special space for wheelchaired worshippers — was added in 2011.

We are proud of, and humbled by, our history and we contribute to it joyfully and lovingly with each passing day.